The full program is finally here! 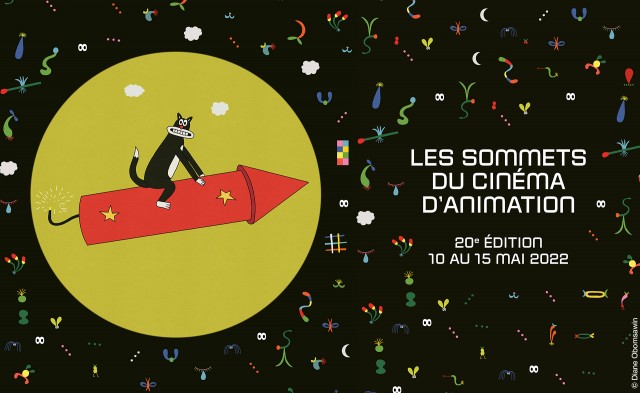 It's celebration time for the Sommets du cinéma d’animation, returning this spring from May 10 to 15 at the Cinémathèque québécoise, with a rich, complete, diversified and exciting program. The festival team is pleased to announce its program representing 114 films (including 49 premieres), four exhibitions, eight professional meetings and plenty of free activities — for young and old alike. Mark your calendar!

For this 20th edition, a change is taking place in the competition. Indeed, the Canadian competition will now be put forward through four programs, including 37 short films from all across the country. Note that this selection is giving a large place to women: the world premiere of the first episode of CARESSES MAGIQUES, the long-awaited series on female masturbation by Lori Malépart-Traversy; the hilarious PAS DE TITRE, by Alexandra Myotte, finalist at the Gala Québec Cinéma for the Iris for Best Animated Short Film; or the student film by Alice Gaboury-Moreau, LE TRIANGLE DES BERMUDES, to discover a famous district of Montreal in a different way. Three other world premieres to note: Manitoban Ritvick Mehra's touching love story, LOVER BOY'S LITTLE DREAM; THE PIONEERS, by Simon Cottee, which looks back on the experiences of the first animals sent into space; WHAT RHYMES WITH TOXIC, an ecological and comedic fantasy by veteran animator Lynn Smith. And what about the magnificent VERT music video, directed by Marcella Grimaux, Vince Hurtubise and Gabriel Poirier-Galarneau for HARMONIUM SYMPHONIQUE?

“ The new format of the Sommets was made possible by a much larger selection of Canadian works than what we used to offer. Through the various approaches, from experimental to narrative films, including music videos, commissioned films and educational ones, an extraordinary know-how is displayed on the screens of the Cinémathèque québécoise," says Marco de Blois, artistic director and founder of the Sommets du cinéma d’animation.

This is how two sessions of the Grand angle program — a non-competitive section devoted to discovery, exploration and daring — will highlight 33 works, a veritable potpourri to widen the eyes: from the music video of Kid Koala, THINGS ARE GOING TO CHANGE, directed by Dale Hayward and Sylvie Trouvé, up to PERF DANCE, by veteran Steven Woloshen, a magnificent combination of dance and experimentation with film. Finally, a special presentation of Caroline Robert's interactive work, SÉROTONINE ANONYME, during which the artist, on stage, explores with sensitivity and humor the fascinating functioning of our brain, will take place before the awards ceremony, on Sunday May 15.

International animation cinema will also have its showcase through various screenings. First with a selection of feature films: LA TRAVERSÉE by Florence Miailhe, a film full of humanity on the drama of migrants, DOZENS OF NORTHS by the great master of Japanese animation, Koji Yamamura, a metaphorical account of a striking beauty on the fragility of our world and the environmental perils, presented with the participation of The Japan Foundation and Panorama-cinéma, as well as the documentary L'ANIMOGRAPHE, OU JE SUIS NÉ DANS UNE BOÎTE À CHAUSSURES, by Thierry Dejean, tackling the fabulous story of Jean Dejoux's revolutionary machine which aimed to transform the creation of animated films. An Animation from the United States session, presented in collaboration with E.D. Films, will testify to the extraordinary vitality and audacity of contemporary American independent animation, brought to you by programmer Keltie Duncan. As every year, the Best of Annecy offers the best of world animation from the renowned festival. The film AFFAIRS OF THE ART by Joanna Quinn, nominated in the Best Animated Short Film category at the last Oscars, will be screened. Let's also remember the works that will open and close this anniversary edition: MY NEIGHBOR'S NEIGHBOR, co-directed by Anne-Laure Daffis and Léo Marchand, and FORTUNE FAVORS LADY NIKUKO by Japanese director Ayumu Watanabe.

INSTRUCTIONAL AND FESTIVE THE ACTIVITIES AT THE SOMMETS

The Sommets are an event for everyone: passionate about animation in all its forms, new audiences, young and old. What characterizes the participants? The pleasure of discovery in a good-natured atmosphere. Thus, on Friday May 13 and Saturday May 14, note the return of the Quiz Night, offered by Quiz Tonic, and the famous Sommets’ Karaoke. The opportunity to celebrate around the official Sommets 2022 beer, designed by MaBrasserie and also available in a convenience store near you! In addition to these festive activities, there is also a Stop Motion workshop for the youngest on Friday May 13. Presented in collaboration with the Montreal Stop Motion Festival, the activity will allow children aged 8 to 12 to learn cutting and assembly techniques to create and easily animate construction paper characters. The Sommets also offer a screening-meeting with filmmaker Marya Zarif, author of the animated web series DOUNIA, who will discuss with the public following the presentation of several episodes on the big screen. This session is presented in collaboration with Télé-Québec.

The Sommets du cinéma d’animation also highlight the recent publication of works on animation cinema with authors Co Hoedeman, Marie-Josée Saint-Pierre and Chris Robinson, during a book signing session on Saturday May 14.

To the artists talk already announced is added that of French filmmaker Adrien Mérigeau, well known for his breathtaking short film Genius Loci, nominated in the Best Animated Short Film category at the 2021 Oscars, as well as his work with Cartoon Saloon Studio, where he signed the artistic direction of the film Song of the Sea, by Tomm Moore.

Each of the juries will unveil on Sunday, May 15, the 2022 winners, including the Guy L. Coté Award, rewarding the best animated film. New this year, the festival is adding a new category: best character, bringing the number of awards to seven.